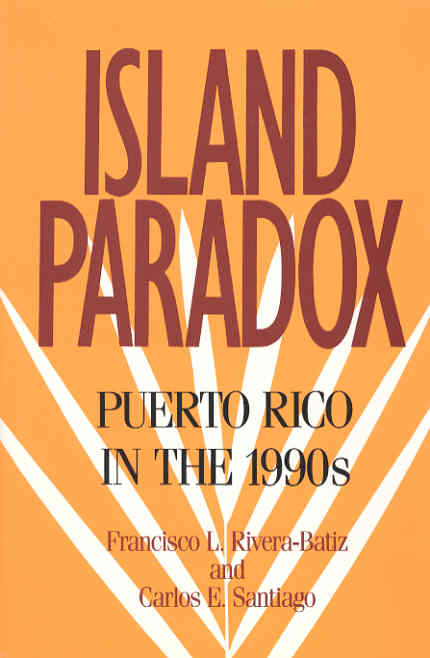 "[The authors] are highly regarded labor economists who have written extensively and intelligently in the past, and again in this volume, on Puerto Rican migration and labor markets... There isabundant statistical data and careful analysis, some of which challenges the conventional wisdom. Highly recommended." —Choice

Island Paradox is the first comprehensive, census-based portrait of social and economic life in Puerto Rico. During its nearly fiftyyears as a U.S. commonwealth, the relationship between Puerto Rico's small, developing economy and the vastly larger, more industrialized United States has triggered profound changes in the island's industry and labor force. Puerto Rico has been deeply affected by the constant flow of its people to and from the mainland, and by the influx of immigrant workers from other nations. Distinguished economists Francisco Rivera-Batiz and Carlos Santiago provide the latest data on the socioeconomic status of Puerto Rico today, and examine current conditions within the context of the major trends of the past two decades.

Island Paradox describes many improvements in Puerto Rico's standard of living, including rising per-capita income, longer life expectancies, greater educational attainment, and increased job prospects for women. But it also discusses the devastating surge in unemployment. Rapid urbanization and a vanishing agricultural sector have led to severe inequality, as family income has become increasingly dependent on education and geographic location. Although Puerto Rico's close ties to the United States were the major source of the island's economic growth prior to 1970, they have also been at the root of recent hardships. Puerto Rico's trade andbusiness transactions remain predominantly with the United States, but changes in federal tax, social, and budgetary policies, along with international agreements such as NAFTA, now threaten to alter the economic ties between the island and the mainland.

Island Paradox reveals the social and family changes that have occurred among Puerto Ricans on the island and the mainland. The significant decline in the island's population growth is traced in part to women's increased pursuit of educational and employment opportunities before marrying. More children are being raised by singleparents, but this stems from a higher divorce rate and not a rise in teenage pregnancy. The widespread circular migration to and from the United States has had strong repercussions for the island's labor markets and social balance, leading to concerns about an island brain drain. The Puerto Rican population in the United States hasbecome increasingly diverse, less regionally concentrated and not, as some have claimed, in danger of becoming an underclass.

Within a single generation Puerto Rico has experienced social and economic shifts of an unprecedented magnitude. Island Paradox charts Puerto Rico's economic fortunes, summarizes the major demographic trends, and identifies the issues that will have the strongest bearings on Puerto Rico's prospects for a successful future.

A Volume in the RSF Census Series