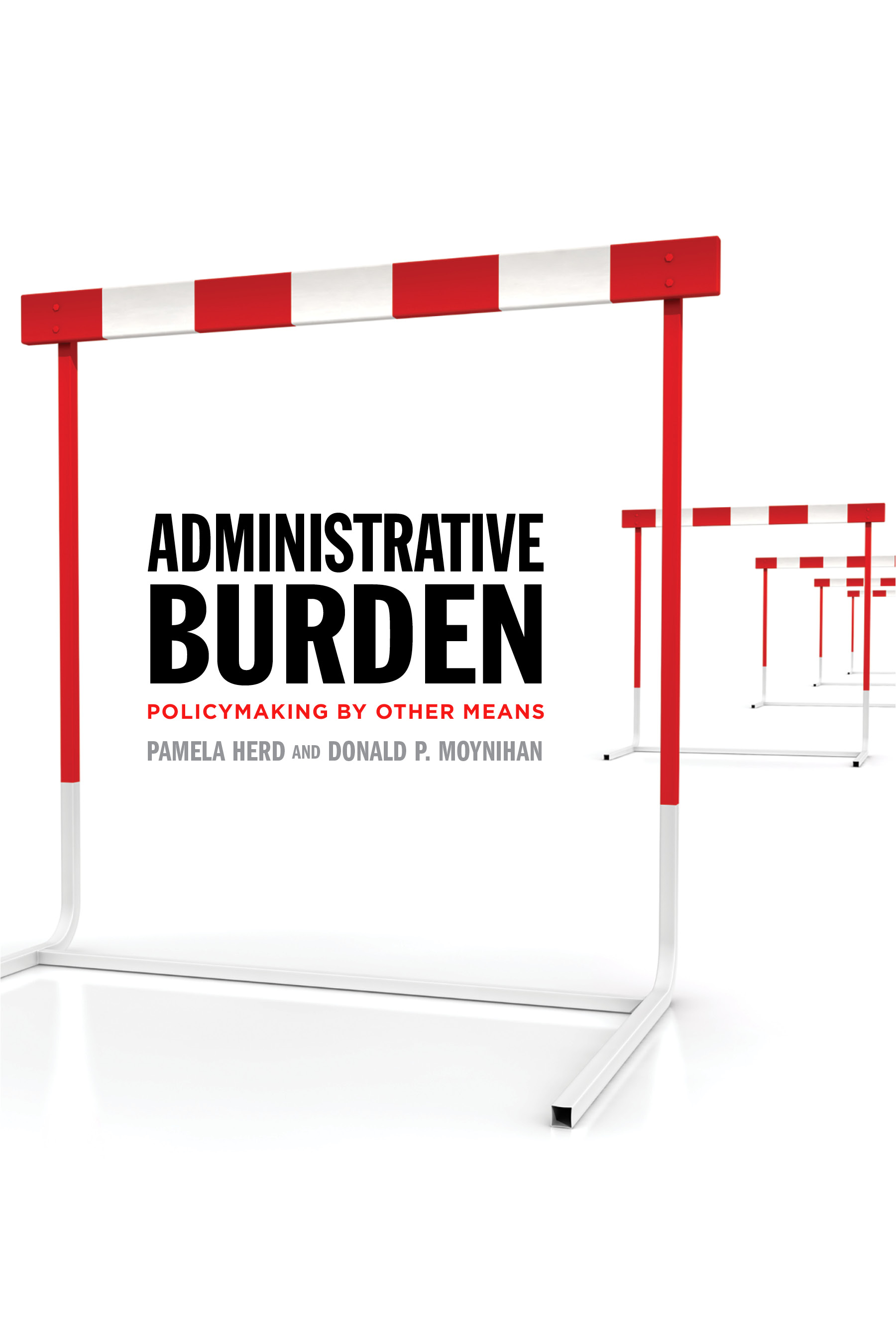 Downloads
Contents
About the Authors
Introduction

“Citizens routinely experience government in their everyday lives, and too often such encounters impose cumbersome challenges and reinforce inequality. In this clearly written and power fully argued book, Pamela Herd and Donald P. Moynihan argue that these ‘administrative burdens’ are political tactics, strategically applied to policies by political leaders who aim to restrict access to rights and benefits. Change is possible, however, as demonstrated by policies in which more effective and efficient procedures have been adopted. This captivating and important book is a ‘must read’ for anyone who wants to see government operate better in serving citizens.”
—SUZANNE METTLER, John L. Senior Professor of American Institutions, Cornell University

“In ways variable and systemic, citizens shoulder burdens of the everyday operations of government. This fundamental truth of modern public administration has never received the attention it merits. Until now. With cutting-edge conceptual formation, mixed methodological lenses, and uncommon rigor, Pamela Herd and Donald P. Moynihan have authored an instant classic on a problem of vast proportions, one that will be setting research agendas for decades to come.”
—DANIEL CARPENTER, Allie S. Freed Professor of Government, Harvard University

Through in-depth case studies of federal programs and controversial legislation, the authors show that administrative burdens are the nuts-and-bolts of policy design. Regarding controversial issues such as voter enfranchisement or abortion rights, lawmakers often use administrative burdens to limit access to rights or services they oppose. For instance, legislators have implemented administrative burdens such as complicated registration requirements and strict voter-identification laws to suppress turnout of African American voters. Similarly, the right to an abortion is legally protected, but many states require women seeking abortions to comply with burdens such as mandatory waiting periods, ultrasounds, and scripted counseling. As Herd and Moynihan demonstrate, administrative burdens often disproportionately affect the disadvantaged who lack the resources to deal with the financial and psychological costs of navigating these obstacles.

However, policymakers have sometimes reduced administrative burdens or shifted them away from citizens and onto the government. One example is Social Security, which early administrators of the program implemented in the 1930s with the goal of minimizing burdens for beneficiaries. As a result, the take-up rate is about 100 percent because the Social Security Administration keeps track of peoples’ earnings for them, automatically calculates benefits and eligibility, and simply requires an easy online enrollment or visiting one of 1,200 field offices. Making more programs and public services operate this efficiently, the authors argue, requires adoption of a nonpartisan, evidence-based metric for determining when and how to institute administrative burdens, with a bias toward reducing them. By ensuring that the public’s interaction with government is no more onerous than it need be, policymakers and administrators can reduce inequality, boost civic engagement, and build an efficient state that works for all citizens.

PAMELA HERD is a professor in the McCourt School of Public Policy at Georgetown University.

DONALD MOYNIHAN is the inaugural McCourt Chair in the McCourt School of Public Policy at Georgetown University.