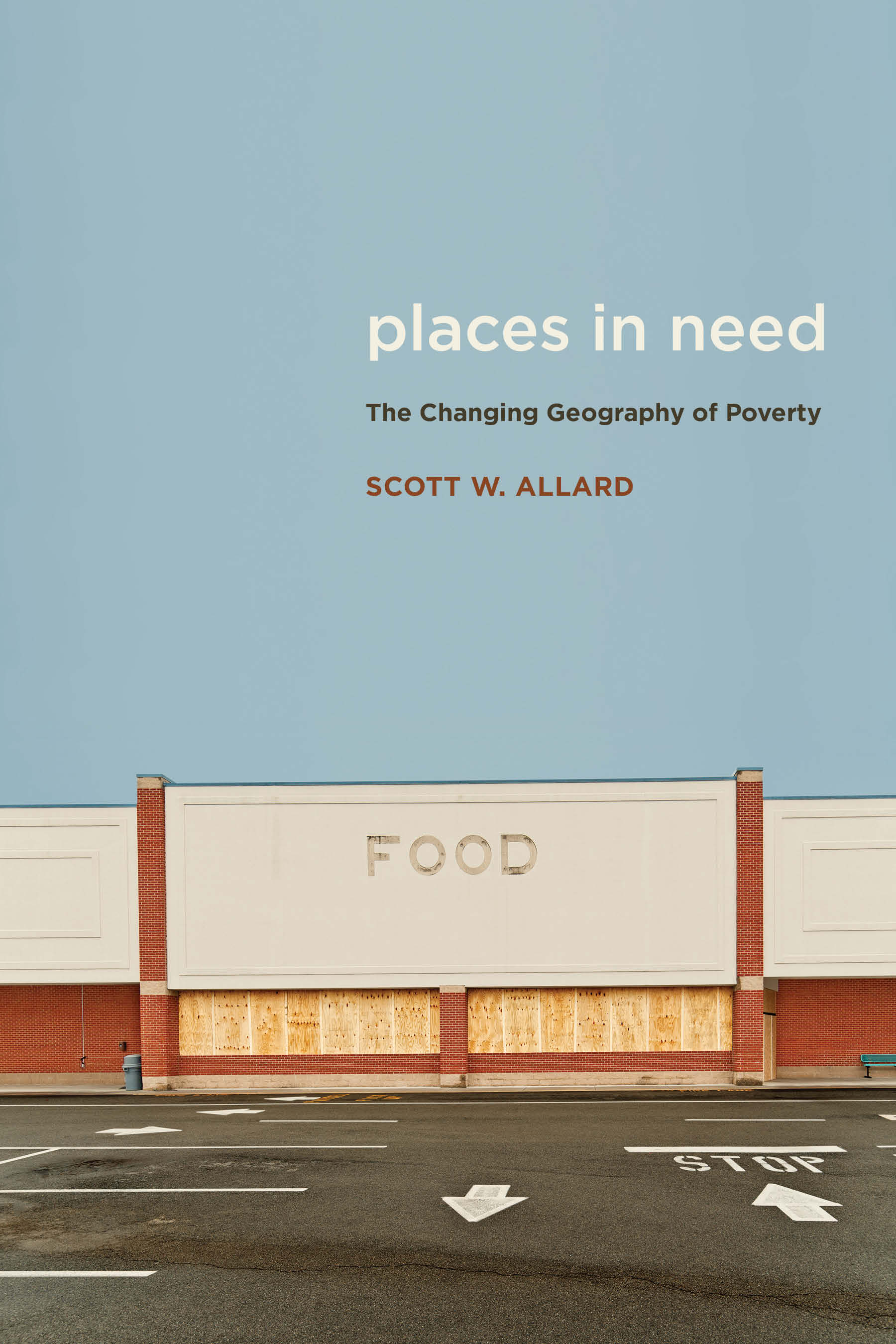 “Scott W. Allard is one of the nation’s foremost experts on poverty, and Places in Need is a tour de force. This carefully-researched book offers more than innovative economic analysis and important lessons for social policy. It represents a deeply moral call to update our thinking about vulnerable people across America and rethink outdated assumptions about how to assist them. Places in Need must become required reading for anyone who seeks to understand modern American poverty, let alone begin to combat it.”

“Places in Need tells the story of how poverty has grown dramatically in suburban America due to displacement, immigration, and job loss and how the existing social safety net is ill-equipped to address this new challenge. Scott W. Allard’s analysis expertly marshals both quantitative and qualitative data to give a nuanced account of the difficulties of meeting social needs in suburban locales. His insights and policy recommendations should be carefully studied by policymakers and social service providers as they come to grips with this new reality.”

“An exceptionally rich book that astutely focuses on key current issues related to the geography of poverty in the United States and trends therein. Scott W. Allard’s analysis is impressive in both its breadth and depth. His insights regarding the implications of geographic location for anti-poverty policy—how best to support low-income individuals and families in urban, suburban, and rural areas—make Places in Need essential reading for scholars, policymakers, and policy practitioners alike.”

Americans think of suburbs as prosperous areas that are relatively free from poverty and unemployment. Yet, today more poor people live in the suburbs than in cities themselves. In Places in Need, social policy expert Scott W. Allard tracks how the number of poor people living in suburbs has more than doubled over the last 25 years, with little attention from either academics or policymakers. Rising suburban poverty has not coincided with a decrease in urban poverty, meaning that solutions for reducing poverty must work in both cities and suburbs. Allard notes that because the suburban social safety net is less developed than the urban safety net, a better understanding of suburban communities is critical for understanding and alleviating poverty in metropolitan areas.

Using census data, administrative data from safety net programs, and interviews with nonprofit leaders in the Chicago, Los Angeles, and Washington, D.C. metropolitan areas, Allard shows that poor suburban households resemble their urban counterparts in terms of labor force participation, family structure, and educational attainment. In the last few decades, suburbs have seen increases in single-parent households, decreases in the number of college graduates, and higher unemployment rates. As a result, suburban demand for safety net assistance has increased. Concerning is evidence suburban social service providers—which serve clients spread out over large geographical areas, and often lack the political and philanthropic support that urban nonprofit organizations can command—do not have sufficient resources to meet the demand.

To strengthen local safety nets, Allard argues for expanding funding and eligibility to federal programs such as SNAP and the Earned Income Tax Credit, which have proven effective in urban and suburban communities alike. He also proposes to increase the capabilities of community-based service providers through a mix of new funding and capacity-building efforts.

Places in Need demonstrates why researchers, policymakers, and nonprofit leaders should focus more on the shared fate of poor urban and suburban communities. This account of suburban vulnerability amidst persistent urban poverty provides a valuable foundation for developing more effective antipoverty strategies.

SCOTT W. ALLARD is professor of public policy at the University of Washington’s Daniel J. Evans School of Public Policy and Governance.